The Origin of Banshu Ikkon

Banshu
Using Rice that has benefited from the bountiful nature of Banshu (the south eastern part of Hyogo Prefecture),
as well as the water of Banshu, we value the original goodness of local sake,
cultivated in a climate with great temperature differences.

Ikkon
A glass of sake.
“Enjoy this sake we spared no time or effort brewing,”
was the inspiration behind the name.

The Abundunt Blessings of Banshu

Water from the Ibo River basin, which is the underground water of Mt. Hyono,
the highest peak in Hyogo Prefecture, is pumped from our company’s well and used as preparation water.
We use a pleasant tasting soft water that is about 30mg/L.
This water is an indispensable asset for us at our company,
as we aim for a smooth and soft quality of sake.

Sake rice, such as “Yamada Nishiki”, “Hyogo Kita Nishiki” and “Hyogo Yume Nishiki,”
among others, is native to Hyogo prefecture.
The Banshu region is the rice bowl region for sake rice, representing Japan.
It is our conviction that a Banshu brewery brews Banshu products with Banshu water.
We are particular about our sake rice, making sure that it is not rice that is merely grown in the prefecture,
but rice that is originally from Hyogo prefecture.

We aim for a sharp tasting sake where, although you may feel a steady savoriness (umami),
there is a suitable level of acidity that quickly disappears in the second half, making you want to drink another cup.

This isn’t a sake that you’ll enjoy with just a single sip.
Our ideal for “Banshu Ikkon” is a sake that is routinely placed on the dinner table,
made all the more delicious when paired together with a meal.

Adding a touch of color to the dinner table so you’ll be bound to smile.
We’d like to continue to brew sake that “makes more people smile”.

For that purpose, we make full use of old and new technologies and spare no effort,
taking the challenge of seriously making sake head on.

A part of Banshu Ikkon’s sake is stored at “Meijugura” in the historic site of Meinobu Mine in Yabu City,
Hyogo Prefecture.
There is little temperature change within the mine throughout the year, and remains around 12°C.
The mine blocks light and there is no vibration.
It is a “natural cellar” suitable for long-term preservation of sake.
Sake that is anticipated to be stored in “Meijugura” is made to be gently aged, in order to give it a soft, deep, and smooth taste.
The mine is an important asset of ours that expands our possibilities with sake.

About the Head Brewer 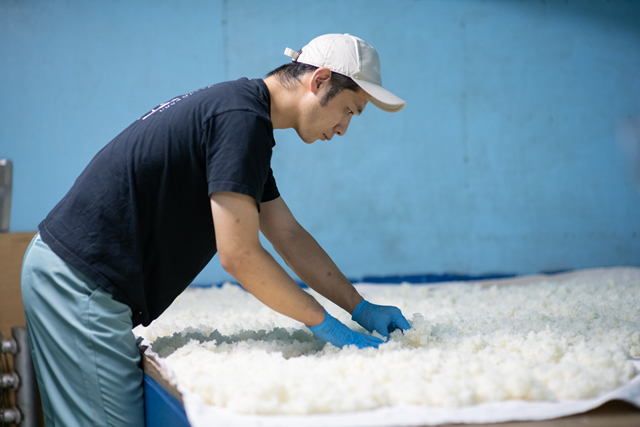 7th generation, Yuichi Tsubosaka.
After graduating from college, he worked in a liquor wholesale business in Tokyo.
During that experience, he reconsidered his profession, saying,
“I want to make and deliver with my own hands what I think is
‘ the most delicious,'”
whereupon he joined Sanyohai Shuzo in 2008.
He has been in his current position since 2015 after receiving training at a specialized institution and mentorship under head brewer Tajima,
who had maintained the taste of “Banshu Ikkon” for many years.
Day by day in his profession, he continues to take the challenge of sincerely making sake head on.

Tenpo 8 (1837) October
Keiichiro Tsubosaka, the first generation, purchased Denshichi Nukaya’s house and established it as a sake brewery.
Meiji 23 (1887)
A brewing warehouse was built (burned down in 2018)
Taisho 3 (1914)
The brewing storehouse was extended.
Showa 8 (1933)
Another brewing storehouse was built.
Showa 25 (1950)
Established Tsubosaka Brewery Co.
Showa 41 (1966)
Company name changed to Sanyohai Shuzo Co.
Showa 54 (1979)
Reorganized as a joint-stock company and changed the company name to Sanyohai Shuzo Co.
Heisei 6 (1993)
Started to use storage facilities at the Akenobe Mine (Meisyu Storehouse).
Heisei 10 (1998)
Appointed the 6th brewer, Koichiro Tsubosaka as the representative director
Heisei 22 (2010)
The main building and the brewing warehouse were designated as important buildings in the Hyogo Prefecture landscape formation.
Heisei 27 (2015)
Installed a large refrigerator for storage
Yuichi Tsubosaka, Senior Managing Director, became the chief brewer.
Heisei 30 (2018)
A wooden brewing warehouse from the Meiji and Taisho periods was destroyed by fire.
Reiwa 0 (2019)
Changed to Yabuta type automatic presser BP board.
Reiwa 3 (2021)
Obtained a license to produce fruit wine.
Began production of “CIDRE RonRon”.
Built a raw material processing warehouse on the site where the Meiji warehouse burned down.
Newly built a stainless steel room for producing koji (a malted rice starter for fermentation) and a refrigerated sake mother room.
Built a new refrigerated brewing warehouse and a new bottling line with a clean room.